The exposed portion of the step, landing or hall alongside the runner. 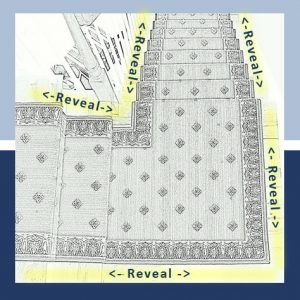 This is something to consider when choosing your runner Width.  There are no “rules” as to the reveal. Stair and hall widths vary more than runner product widths. Most often you’ll find that your space has varied widths and therefore your reveal will need to vary within a single staircase or hall.

All stated runner widths are approximate.